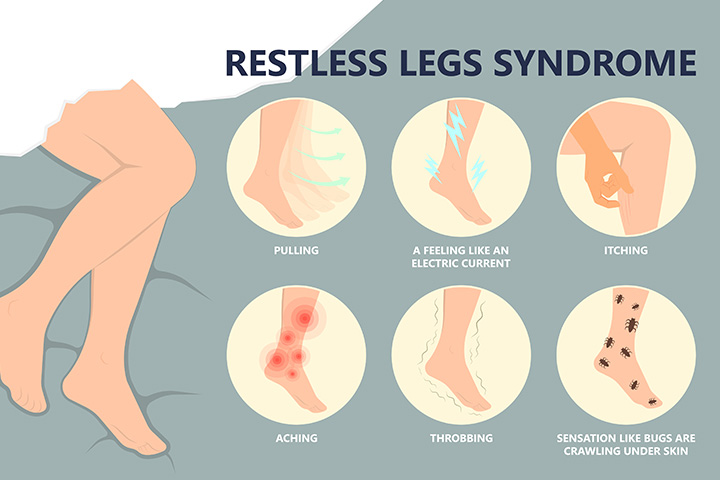 Restless legs syndrome (RLS), also called Willis-Ekbom Disease, causes unpleasant or uncomfortable sensations in the legs and an irresistible urge to move them. Symptoms commonly occur in the late afternoon or evening hours, and are often most severe at night when a person is resting, such as sitting or lying in bed. They also may occur when someone is inactive and sitting for extended periods (for example, when taking a trip by plane or watching a movie). Since symptoms can increase in severity during the night, it could become difficult to fall asleep or return to sleep after waking up. Moving the legs or walking typically relieves the discomfort but the sensations often recur once the movement stops. RLS is classified as a sleep disorder since the symptoms are triggered by resting and attempting to sleep, and as a movement disorder, since people are forced to move their legs in order to relieve symptoms. It is, however, best characterized as a neurological sensory disorder with symptoms that are produced from within the brain itself.

RLS is one of several disorders that can cause exhaustion and daytime sleepiness, which can strongly affect mood, concentration, job and school performance, and personal relationships. Many people with RLS report they are often unable to concentrate, have impaired memory, or fail to accomplish daily tasks. Untreated moderate to severe RLS can lead to about a 20 percent decrease in work productivity and can contribute to depression and anxiety. It also can make traveling difficult.

Because moving the legs (or other affected parts of the body) relieves the discomfort, people with RLS often keep their legs in motion to minimize or prevent the sensations. They may pace the floor, constantly move their legs while sitting, and toss and turn in bed. A classic feature of RLS is that the symptoms are worse at night with a distinct symptom-free period in the early morning, allowing for more refreshing sleep at that time. Some people with RLS have difficulty falling asleep and staying asleep. They may also note a worsening of symptoms if their sleep is further reduced by events or activity.

RLS symptoms may vary from day to day, in severity and frequency, and from person to person. In moderately severe cases, symptoms occur only once or twice a week but often result in significant delay of sleep onset, with some disruption of daytime function. In severe cases of RLS, the symptoms occur more than twice a week and result in burdensome interruption of sleep and impairment of daytime function.

People with RLS can sometimes experience remissions—spontaneous improvement over a period of weeks or months before symptoms reappear—usually during the early stages of the disorder. In general, however, symptoms become more severe over time.

People who have both RLS and an associated medical condition tend to develop more severe symptoms rapidly. In contrast, those who have RLS that is not related to any other condition show a very slow progression of the disorder, particularly if they experience onset at an early age; many years may pass before symptoms occur regularly.

In most cases, the cause of RLS is unknown (called primary RLS). However, RLS has a genetic component and can be found in families where the onset of symptoms is before age 40. Specific gene variants have been associated with RLS. Evidence indicates that low levels of iron in the brain also may be responsible for RLS.

Considerable evidence also suggests that RLS is related to a dysfunction in one of the sections of the brain that control movement (called the basal ganglia) that use the brain chemical dopamine. Dopamine is needed to produce smooth, purposeful muscle activity and movement. Disruption of these pathways frequently results in involuntary movements. Individuals with Parkinson’s disease, another disorder of the basal ganglia’s dopamine pathways, have increased chance of developing RLS.

RLS also appears to be related to or accompany the following factors or underlying conditions:

RLS is generally a lifelong condition for which there is no cure. However, current therapies can control the disorder, minimize symptoms, and increase periods of restful sleep. Symptoms may gradually worsen with age, although the decline may be somewhat faster for individuals who also suffer from an associated medical condition. A diagnosis of RLS does not indicate the onset of another neurological disease, such as Parkinson’s disease. In addition, some individuals have remissions—periods in which symptoms decrease or disappear for days, weeks, months, or years—although symptoms often eventually reappear. If RLS symptoms are mild, do not produce significant daytime discomfort, or do not affect an individual’s ability to fall asleep, the condition does not have to be treated.